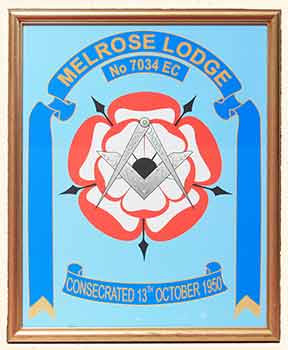 The period after the Second World War saw rapid development of the northern suburbs of Johannesburg, and the new residents included many immigrants from overseas. The sponsoring Lodge, Woodlands, had as members some outstanding members of the Craft, including Jack Folly - an Assistant Grand District Grand Master from 1949 - and two brothers, Pieter and John Roos, who were beginning to make what became major marks in the District. So circumstances favoured the establishment of a new lodge, with Jack Folly as the Charter Master. First thoughts of naming the Lodge after RW Bro Vernon Fairbrass could not be realised, but it was his suggestion that it be called after the suburb of Melrose, where he had lived for over 20 years. The lodge crest, representing the red and white Tudor Rose of England was designed by an early joining member, Gordon Fisher.

Shortly after the lodge was formed the 'Woodlands' Masonic Hall in Parktown North was substantially extended, and Melrose Lodge met there until 1992, with the ladies providing the festive board. The lodge made satisfactory progress, and was always supportive of the District, not only in charitable effort but in providing active officers. These have included - apart from Jack Folly and Pieter Roos - Dion de Beer, a 'chainbearer' from 1989 and holder of senior offices in the Royal Arch. As the years passed the lodge drew its membership from a wider environment, and this was probably an influencing factor when - in the hope of reducing costs - the somewhat controversial decision was made, in 1992, to move to the Masonic Hall in Modderfontein.

Reference: 'A Century of Brotherhood' by A A Cooper & D E G Vieler